We had been looking forward to last Saturday for weeks. It was the first time in two years we were going to see The Brew City Bruisers, Milwaukee’s local Roller Derby group. I know, it sounds so 1980’s, but it’s really a lot of fun! If you have seen the movie “Whip It”, it’s a lot like that. Girls with scary/funny names that push each other around-on roller skates. That takes talent. I don’t think I could even make it once around a roller rink without falling. 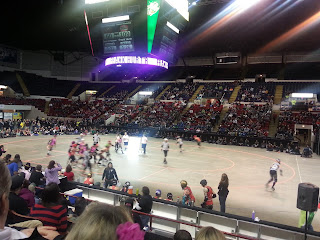 The Brew City Bruisers used to play at a sports complex in nearby Franklin, WI that was not nearly big enough for all their fans. Although the $2 cans of beer were, great, it was impossible to find seats. Last year they started holding ‘Bouts’ at the US Cellular Arena downtown. All I can say is I’m glad I don’t have to get tickets an hour early, fight to squeeze into a spot on metal bleachers, and maybe see half of whats going on. Even buying tickets right before start time, we got good (padded) seats close to the floor. It was great!

Prior to The Derby, we had dinner at Turner Hall Restaurant. Newly re-opened, this restaurant has been a go-to before Bucks games (since it is across from the Bradley Center) and known for their legendary fish fry.  The Tall Guy may have even graced its floors as a server back in the day…

We started with an appetizer of the Milwaukee Sampler (center image). This platter was made up of sausages, Wisconsin cheeses, house-made pickled vegetables, crostini, and a slice of duck liver mousse. For being the most expensive appetizer on the menu ($12), we thought it was a little skimpy. But who doesn’t love cheese and sausage? We tried the mousse, but none of us are really liver fans so we can’t really judge how good it was. The server and food runner both asked us what we thought of it, and we were honest. They agreed liver is an acquired taste.

Next up were our dinners. Turner’s is definitely more of a more casual-food place. The menu only has 5 ‘Entrees’ including Pork Schnitzel and Panko-Crusted Walleye. The rest of the menu is made up of Flatbreads, Mac N Cheese, Burgers, Chicken Sandwiches, and Soups & Salads. I had the Palm Garden Pressed Cuban (left image). Juicy pork and ham and a phenomenal coarse grain mustard made this one a winner in my book. The Tall Guy had the 3rd Street Blue chicken sandwich. It must have been good, because he ate the whole thing:) All in all, great service, good food, and amazing location when you’re going to an event in this area of downtown. We’ll definitely have to try out the fish fry in the future!