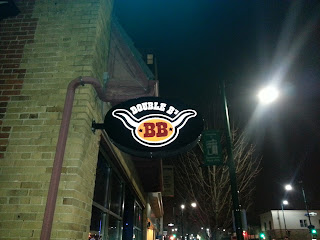 This past Friday night we got started with our 2013 Restaurant Resolutions list! We visited Double B’s BBQ & Burgers in West Allis, WI. Situated in the former Bunker’s space on Greenfield Avenue, this restaurant has only been open about a month. The layout of the space has not changed much since Bunker’s, with the exception of the removal of the stage which made way for more seating. The decor is quite a departure from the black, white and gray retro. Now it is a true BBQ joint, complete with red checkered table cloths and wood paneling. 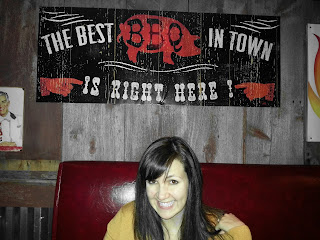 We got to Double B’s around 8PM. There were lots of people at the bar, but not many people in the dining area so we were seated right away. Our server was pleasant and gave us several recommendations. We ordered one of their nightly specials, a New Orleans platter, which consisted of fried shrimp and catfish, hush puppies, jambalaya, and their homemade cornbread with pecan butter. Along with that, we had to try some sort of barbecue, so we ordered the barbecue pork plate with baked beans and their homemade mac’n’cheese. 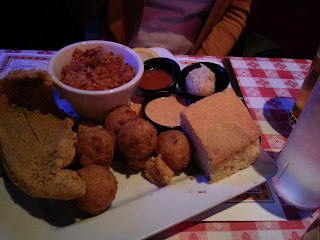 The meal was all over the place. Presentation-wise, the New Orleans platter looked appetizing. Served on a white platter, the food filled the plate. The jambalaya was served in a ceramic dish in the middle. On the other hand, when the pork was put down we both thought it looked like prison food. We may have used the term ‘SOS’. The pork was served on a silver metal tray, just slapped on one side. Beans and mac’n’cheese came on the tray in styrofoam cups. The pork and sides did not fill the tray so it looked like you didn’t get a lot of food. Not to mention the color of the pork was pretty close to the color of the tray. Not a pretty plate. We get the whole ‘barbecue joint’ theme, but when you’re paying $13 for a dinner, you’d rather it not look so, well, chintzy. 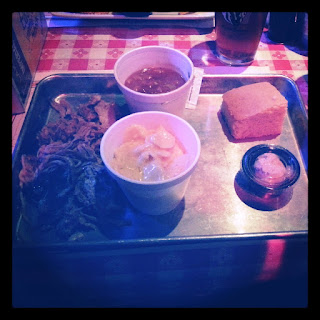 Onto actually eating the food. We’ll start with the good and filter down to the bad. The hush puppies, which are not a regular menu item, were phenomenal. We’ve had them too many times in the south, and these were right up there with Charleston’s best. Crispy on the outside, creamy texture on the inside. The cornbread was moist and the pecan butter we could have eaten out of the container by itself. True comfort food. The jambalaya and beans were ok, nothing really to report there. The shrimp and catfish were cooked well and not greasy, but they were breaded in the same flavorless breadcrumbs. They needed seasoning, badly. The mac’n’cheese tasted good, until we tipped the cup and realized it was dripping in oil.

The pork comes without any sauce on it, because Double B’s offers 4 different kinds of barbecue sauce to add to the pork yourself at the table (Kansas City, North Carolina, South Carolina, and Texas). But tasting it alone, it just tasted like plain pork that was a tad dried out. It had a faint taste of smoke, but you really had to be looking for it. Adding the sauce gave it all of its flavor, but we must say the sauces were pretty tasty. Our favorite was the (mustard based) South Carolina sauce. Our waitress had said the pork was her favorite item on the menu and she eats it all of the time. Maybe we got a bad order, but it wasn’t so good we’d order it again. 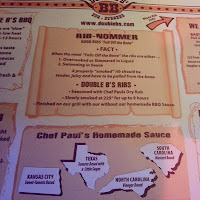 We don’t want to say we don’t recommend this place because they’ve only been open a month. Maybe check it out around springtime when you can sit on their patio with a beer and hopefully some hushpuppies:)