The Tall Guy and I have been watching Top Chef together for the last five and a half years, well before Tall Guy & a Grill was even a thought. Dan loved cooking and I loved watching people cook, so it was always on our radar.

As we have gone deeper and deeper into the catering world, we have learned a lot from the show. Not having any formal training in the culinary arts, it has been a great way for us to stay abreast of presentation and cooking technique trends. In fact, it helped give us the idea for the presentation of our award winning meatball at the First Annual Milwaukee Meatball Competition! 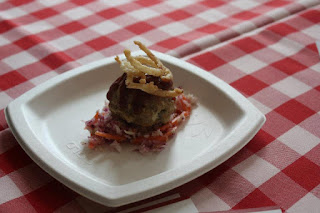 One of the biggest lessons that we have come to appreciate is using fresh, local foods. I have visions of Tom Colicchio asking, “Were those canned tomatoes I tasted in your dish?” “Why did you use frozen shrimp?” And then those contestants being sent home. Being a self proclaimed short-cut cook, I admit to having used pre-packaged, pre-prepared foods quite a bit. But since Dan and I have been cooking up a storm and experimenting with new recipes, I get it. I never thought I’d say it, but I can taste the difference between a sauce made with canned tomatoes and can tell when shrimp has been defrosted. Thank you Top Chef, for making us food snobs:)

We also like getting to know the contestants as the show goes through the season. We find ourselves picking chefs we think would be awesome to have dinner with-that is, all of them cooking the meal, and then all of us sitting down together, having drinks and laughs. Our Wisconsin girl, Grayson Schmitz, would start us off with a sausage and cheese first course, Richard Blais would make some liquid nitrogen creation, Fabio Viviani would contribute something including his famous gnocchi, Mike Isabella would concoct a dish with pepperoni sauce, and Carla Hall would tie it all up with a delectable southern dessert. Laughs and wine drinking would ensue through the night.

This year we were SUPER excited to go to the National Restaurant Show in Chicago because Fabio, Grayson, and Richard were going to be doing demonstrations and/or signing books at the show. Unfortunately we missed Richard and Grayson, but we got to meet Fabio and had him sign our copy of his cookbook, “Cafe Firenze”. He was awesome. Down to earth, and appreciative of every person who has gotten him to where he is. In fact, he follows Tall Guy & a Grill on Twitter and has responded to our tweets-that is incredible. 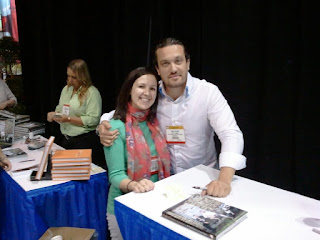 A few weeks ago, I visited our friend Rebecca in DC. She is one of the biggest food snobs I know (and one of the reasons I love her so much!) so I knew she would take me to only the best restaurants. She told me we were going to this new restaurant “Some Top Chef guy just opened.” When I asked her who, she had no idea. Little did I know, it was Bandolero, Mike Isabella’s new restaurant! As we were sipping our margaritas, I saw Mike himself come into the dining room and immediately became star-struck. Rebecca calmly waved him over and took the lovely picture below. I told Mike that The Tall Guy would be very jealous, so he nicely autographed a menu for him. 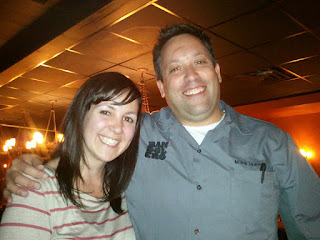 Top Chef Seattle (Season 10) has just started and we’re pretty excited to see what dishes and drama will unfold. Who are you rooting for to win, and to pack their knives and go?