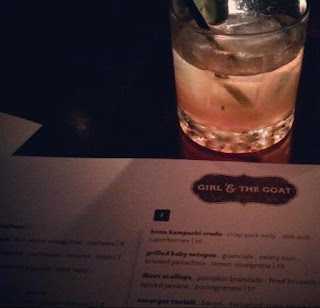 As a (belated, but still within the 1 year time frame) wedding present, our good friend (and groomsman) John took us to Girl & the Goat in Chicago for dinner. Stephanie Izard, Top Chef Season 3 winner, opened this restaurant in the summer of 2010 to rave reviews. John had been prior to our trip, and said it was amazing. A week before our planned date, we called to make a reservation, only to be told they were booked for the whole night! However, they did tell us that their lounge was first come, first served, and offered the same menu as the dining room. Early afternoon that day we hopped in the Mazda and made our way down to Chicago.

Girl & the Goat opens at 4:30. We got found a parking spot on Randolph Street and got to the door at 4:15. The revolving door was open, and the hostess told us we were welcome to sit in the lounge where we could get drinks right away. There were already other people inside! We were going to be six total, so we found spots at the end of the bar, which was an awesome peninsula where we could all see each other, talk, and most importantly, share food! Two of our friends were about 10 minutes behind us, and we probably had to tell 5 or 6 people that their seats were taken. By the time they got there right at 4:30, the whole lounge was full!
Now onto the food! The menu is mainly ‘small plates’. We ordered about 16 things which falls into the average 2-3 plates per person. We would love to regale you with the details of each and every dish (because they were all INCREDIBLE) but instead we will just give you the highlights. Please note, most pictures are borrowed from girlandthegoat.com as the restaurant was romantically lit and our phone pictures didn’t turn out well:)
Sides: Dan is not a green beans fan, never has been. But when he tasted the green beans with fish sauce vinaigrette and cashews, his mind was blown. He even had seconds and thirds! Our other favorite side was the Ham Frites. Imagine thinly cut french fries that taste like bacon with a cheddar beer sauce and smoked tomato aioli. You guessed it, life changing.
Entrees: Amanda’s loves scallops, so her favorite was the Diver Scallops with pumpkin brandade, spiced pecans, pomegranate seeds, and fried brussels sprouts. Like Dan, Amanda grew up hating brussel sprouts, but fried what isn’t good? It sounds like an odd combination, but everything balanced beautifully. The table favorite was the Wood Oven Roasted Pig Face. Yep, we ate pig face, and it was delicious. The face is cooked to crispy perfection, served with a sunny side up egg, red wine-maple glaze, and potato sticks. With this flavor combo this dish almost screams breakfast.
Finally, dessert! We were So full after eating off of 16 plates, but we still had to try something. We opted for ordering the Parsnip Cheesecake. As we were waiting, Dan left the table for a moment, and Amanda asked the server if Stephanie could autograph a menu for the Tall Guy & a Grill office wall. When she found out it was our anniversary, the server returned with the signed menu AND a cast iron skillet filled with creamy fudge brownie triangles topped with homemade vanilla ice cream and fudge. The cheesecake was equally wonderful, with a slightly savory flavor and caramel sauce. A perfect ending to a perfect meal.
Take our advice, make a reservation a month in advance. We’re definitely going back.
Cheers, Tall Guy & the Girl